Opened on September 1, 2012, the Creative center “Zeimuļs” organizes interesting and non-formal education activities for children and youth. “Zeimuļs” is a place where the new, active, and creative potentials of the city meet.

More than 80 coteries work in the center during the academic year. The architect of the building Rasa Kalniņa used Latvian symbols in the design and the main materials of the building are concrete, metal, glass, and wood.

There are 5 floors, in a total area of 4490 m2. The building is special for its bold, unusual architectural solution – inclined towers and roofs covered with lawns. This coating has a number of advantages, it is not only aesthetically attractive in appearance but also reduces heat loss and energy consumption in the cold winter months, also reduces the thermal load and rainwater flow, filters pollution after rain, and isolates sound. Visually, the towers of the building resemble two pencils, which are decorated with Latvian signs and patterns. At night “Pencil” acquires a particularly magical look, thanks to its multi-colored lighting.

The idea of the building was developed as a proposal for an architecture competition for a place next to the castle mound of Rezekne and the aim of the city – was to create an innovative, creative environment for children and youth in Rezekne that would stimulate the young graduates to return to live and work in Rezekne town after their studies, unique, new leading-motive for the development of the town, new impress of time.

The green roof of the building is one of the largest in the Baltic States.

The center can only be viewed from the outside. In the nearby Rēzekne Tourism information center you can ask for an excursion, phone: +371 26332249. 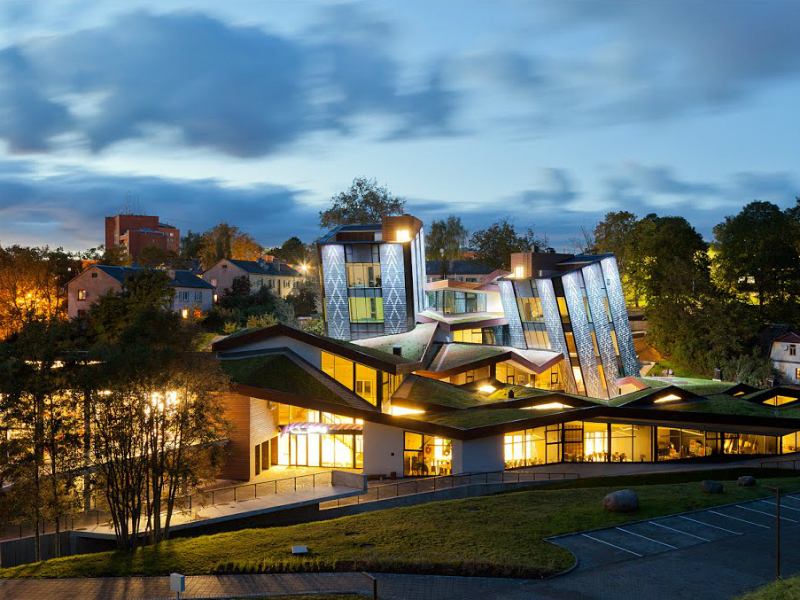 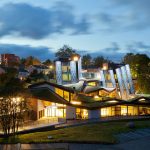