The Peipini congregation was created after World War I and its first dean was Janis Ziemelis. The church was built in 1924. From outside the church is sheathed by boards of ochre color, and the ceiling emphasizes the antiquity of the temple. In 2002 Peipini Catholic church was included in the draft list of the state-protected cultural monuments.

In the church, there are works of art, which since 2001 are included in the draft list of protected objects –the ceiling lights of the church, candelabras, the reliquary. 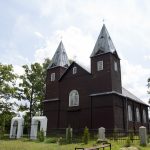